“What will this day be like? I wonder. What will my future be? I wonder. It could be so exciting to be out in the world, to be free! My heart should be wildly rejoicing! Oh, what’s the matter with me?  I’ve always longed for adventure, to do the things I’ve never dared. Now here I am facing adventure …then why am I so scared?”

Terrified, actually. Papa and Klaryssa dropped me off. It was a rainy day in Vancouver but we made it to YVR by 9:00am. They helped me check in and walked me to security.  Klaryssa said I have to learn to do it on my own. It made me realize how much I rely on her…on all of them. We got to security and it was time to say goodbye. I felt like crying, I really did.  I was holding back tears. Suddenly, the realization that it was just gonna be me alone in the great, big world sunk in. As Klaryssa said, it was going to be a “gongshow”.

It felt weird to be alone. I realize I’ve never really been alone before.  There’s always been someone.

The security guy asked me why I was going to New York. I told him “to have fun” but in my head I was thinking “TO LIVE. TO EXPLORE. TO FIND MYSELF.” All that typical coming-of-age, solo-travel stuff. I wonder what he would have said if I told him that.

I made it to my gate alright. Sitting by myself, I wiped the tears from my eyes, suddenly missing everyone and everything. I felt like I was in a completely different, distant world – far away from everyone. I wanted to feel excited and eager – not scared and alone!

We should be boarding the flight soon. I called Omi and she said she’d light a candle for me. Right now, there is a pain in my chest.  It almost feels like I’m going to have a heart attack. I don’t even know what that feels like but I imagine it would feel something like this. Also, I forgot to bring gum. I sure hope my ears don’t pop.  Also, I wore perfume because I didn’t want to stink. Klaryssa said I shouldn’t have done that because some people are allergic.

Anyway, writing is getting me worried. I’ll stop now.

I’m up in the air! I was so terrified, I thought I was gonna die but take-off went smoothly – my ears didn’t even pop! The lady beside me told me to be brave and have a good time in New York. I told her I would try.

I started listening to my New York soundtrack and it calmed me down. Though I’m still rather worried because the hardest part is yet to come: getting to the hostel. It’ll be dark and I’m not looking forward to taking the metro in a strange city.

I like looking out the plane window. We are above the clouds and so there is blue sky. It’s beautiful. It’s almost like its own little city. Or heaven. It’s sights like this – the sun illuminating the white clouds until they practically blind your eyes – that remind me how beautiful and grand the world is. It’s a great, big, beautiful world and I’m part of it.  Yes, I’m off to find my corner of the sky…wish me luck!

I’ve jumped ahead two hours due to the time difference. Right now, I’m sitting on my flight that will take me to NYC itself. I almost got on the wrong flight. In fact, I completely walked the wrong way and then had to backtrack and still went to the wrong gate! Typical me. I was sweating like a pig when I got on the plane (still am). Good thing I wore the perfume!

I’m a bit stressed because there wasn’t enough room for my luggage so they had to put it underneath. It’s annoying because it’ll take extra time and I have a shuttle to catch. Also, it just increases the risk of something going wrong.

There are quite a few good-looking guys on this flight but of course, I didn’t end up anywhere near them. That’s life, I suppose. Annoying.

Anyway, I’m feeling more calm now although I’m still upset my luggage is down below. I hope I’ll be able to find it relatively quickly!

We are in the air! I luckily got the window seat (again) and the sun was setting so it was beautiful. How nerdy is it of me that I listened to “A Whole New World” on repeat while the plane was taking off? I don’t care, it fit so perfectly. Shining, shimmering, splendid indeed!

I still can’t get over how perfectly well the houses line up when looking down at them. It never ceases to amaze me…

PS: There is a baby behind me! Luckily, she stopped crying!

Well, I made it! I made it to the hostel all in one piece and I am definitely getting a travelling experience. THIS PLACE SUCKS. I seriously don’t feel safe here…I don’t think I’ll sleep a wink tonight. Seriously…a CAT just walked into the room and went under the bed. How disgusting. I wonder how many other vermin live here. Luckily, I’m only staying here one night. I would probably cry if I was staying more. I mean, this could totally be an “out of the frying pan and into the fire” situation…FIT HOTEL may be 10 times worse! I doubt it though. How could it get any worse than this?

I wish I was rich. Then I could be staying at a nice hotel and be lying on a fluffy bed.

I think I’m just gonna leave as soon as possible tomorrow. I definitely don’t want to leave my luggage here unattended. And I’ll be sleeping with my money under my pillow.

There is only one guy I trust here and it’s a British guy named Mike. I didn’t even talk to him but I trust him. Everyone is preparing to go out tonight – I hope he stays. I need someone normal to talk to.

Oh, I guess I’m getting ahead of myself. You don’t even know how I got here.

Back to the plane: it was a beautiful descent. I looked out my window and literally said “wow” under my breath. It was that breathtaking! Seeing the lights of the Empire State building, and the Chrysler, and just everything!

Baggage claim went well. I got my luggage and found the shuttle to Penn station. It’s crazy but I found a girl from Ontario (funny how Canadians always find each other). She was such a keener! Went to an Ivy League business school, wakes up at 6am to study for 2 hours before work, and goes to NY to visit her boyfriend who works from 9-3AM in public equity. CRAZY. Also, when she was 15, she went on exchange in Brussels (people actually get to go on exchange in high school?) and she went to France by herself in first year uni. Anyway, her name was Lauren and I’m glad I met her because she helped me get a taxi.

My taxi driver grew up in the Bronx. I gave him $35 ($4 tip). I guess he was nice though. He even waited until I got inside the house when he dropped me off. I think he was scared for me. Seriously, it looked so sketchy. I’m kinda scared to tell my family because I know they will just get mad. I guess I will have to sugarcoat it.

The taxi ride was nice because I rolled down the windows and there were so many things to see! When we crossed the Brooklyn Bridge, I saw the statue of Liberty in all her glory.

I really wish I had my own room. There’s only one other girl sleeping in here but it’s pretty noisy. The floors creak like crazy. I can hear people talking outside…how thin are these walls? I bet there are bedbugs. And probably flees or moths. I thought everyone was leaving but I can still hear them thunking around. Good night. 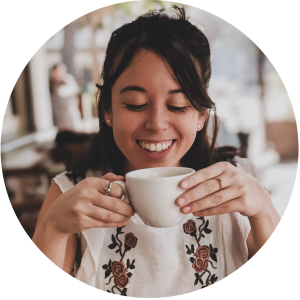 Things I Learned Growing Up
is a blog dedicated to the fragility of time, nestled somewhere between nostalgia for the past, a deep yearning for the future, and the unshakeable longing to
live boldly in the present.  Here, we celebrate the people who move us, the moments that inspire us, and all the fears, desires, hopes, and doubts that make us human.

A post on green rooms because plants make a lot of things better 💚⁠
Happy birthday to me 🎈⁠
I love the wind. It makes me feel powerless in a good way. Because actually, going wherever the wind takes you takes a lot less effort and is a lot less stressful than trying to control everything and make the right decisions. ⁠
Does anyone else feel like January goes on forever? This is what I was thinking about on my evening walk. ⁠
It's strange to think about all the memories that every street holds. ⁠
It's dark and it's cold and sometimes that means we have to create our own light. 🕯️⁠
This post is about people, and feelings, and the moon. 🌙⁠
My word of the year is confident which is actually very different from what I thought it was. ⁠
Advertisements